She is passionate about providing Reiki with a gentle healing touch and deliver a potent healing experience for all ages and health conditions to people, animals, environment, and situations. Healing sessions can be performed either by hands-on in person or by remote distant fashion for global access. Training’s can be taught in small or large groups, public or private, and in-home or destination retreat style are all possible. Both her healing sessions and teachings offer a grounded yet transformational approach to living, being and embodying Reiki spiritual disciplines.

Since learning Reiki in 2011 and initiated a Reiki Master in 2014, her mission is to create a more peaceful world and a nurturing healing space for the energetic reawakening and connection of the body, mind, and spirit to take place.

*The Reiki Alliance is a global professional organization of Reiki Masters committed to maintaining the founding principles of Usui Shiki Ryoho (Usui System of Reiki) brought through the Hawaiian Islands to the Western World, since 1936. Alliance members are guided by a professional standard and a code of ethics. Their practice, teaching, and association within The Reiki Alliance represents many years of direct experience and apprenticeship with experienced masters.

The wound is the place where the Light enters you- Rumi 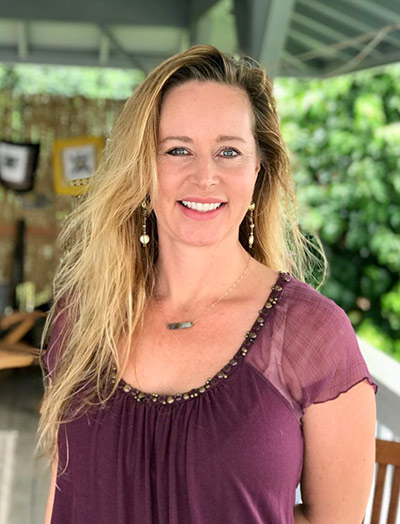 Jenna was born and raised living on a horse farm in a small town along the Puget Sound waterfront in Olalla Washington State. She eventually moved to the Bay Area Northern California completing her science degree with a career in Dental Hygiene while raising a son to be a man. Years later in 2007, she moved to Maui and has remained earning a living and made possible to call Maui her home.

In 2011 when reiki was introduced in her life, she had suffered years on-going from 5 herniated disks in the low back and sciatic pain. The painful episodes would take months to recover from and cause more mental stress and scattered attention, emotional and hormonal imbalances, and physically, spiritually, and energetically burned out. Even with all the natural alternative options she had been treated by, back surgery started to look like an option to rid the painful turmoil.

After researching surgery, the outcome did not appear to end the personal suffering. She succumbed to live with a pain body that stimulated an inner questioning of, “is there anything else that could treat the problem?” Soon after, someone recommended a Reiki Master to her, and she learned more about what Reiki was. She immediately signed up for the next Reiki training with a series of Reiki sessions as it intuitively made sense. This new find gave relief to what seemed a lasting way to healing naturally, she had no expectations other than looking forward to the possibility in feeling better.

Over time in learning the discipline value to the morning and night self-care routine daily and series of Reiki sessions, the pain episodes lessened significantly and eventually disappeared, with no longer requiring surgery. The unexpected changes she also noticed was, more stamina by no longer being drained by daily activities and a renewed sense of freedom and vitality. Without a need for pain medications, mental clarity increased with calming positive thoughts returning surround by emotional harmony and deep inner peace. All senses appeared to be re-awakening and connecting to a deeper embodiment to the world and all of life. Life was becoming enlivened in unexpected ways from this powerful infinite healing energy that is activated through the hands at any given moment for a lifetime.

These changes created a profound desire to share Reiki immediately and further the healing potential of herself and others. She has since quit her job in dentistry to embrace living a life of Reiki full time…

Reiki brings a variety of experiences together to serve a common goal in education, conservation, research, and awareness to communities all around. As a teen Jenna rode horses with special needs kids, volunteer advocate in battered women shelters and holiday events, and became members of the Peace Corp and Amnesty International. In College she was awarded Leadership from the Santa Clara County Dental Hygienist Society for her outstanding community volunteer service as Dental Hygiene Class President. From this seed, grew the inspiration in how to better serve humanity through Reiki Natural Healing. Today through her public Reiki practice, Jenna continues to enrich heart opening feminine embodiment practices and illuminate the protection, education and conservation of animals, youth, special needs, and environment.

Book an appointment today and return to inner peace, love & harmony!
Get Started
Copyright 2022 Reiki With Jenna | website created by Web Styles Hawaii
Back To Top